A near-term pullback, then the third bubble in 100 years is coming, says strategist. Here’s how to get ready.

cryptocurrenciesgovernmentUnited StatesBitcoinmarkets
Of the dozens of central bank meetings crammed into this week, the Federal Reserve is seen stealing the show with a tapering start and possible early rate-hike hints.

After the “worst inflation call in history” and its credibility shattered, Chair Jerome Powell will need to take the reins hard, says Allianz’s chief adviser Mohamed El-Erian. So we’ll see if a potentially sterner Fed knocks the S&P 500, which glided to a new high on Friday despite nosebleed consumer prices, off the Santa rally path.

On to our call of the day from a team at Stifel, led by Barry Bannister, warning of another bubble for the ages, thanks to “poor monetary and fiscal decisions since COVID-19.”

And maybe enjoy any Santa rally while it lasts, as the team sees a near-term correction taking the S&P 500 toward the low 4,000s by the first quarter of next year. And then…

“Populism (which the Fed and Treasury seemingly embrace) leads to poor choices and even worse outcomes. Rate repression may again create a bubble that bursts (always do), followed by a lost decade,” it said.

It said investors should look to history for proof this can happen. The S&P 500 dropped nearly 20% in the third quarter of 1998 before the dot-com bubble burst in 1999-2000. A “late arriving” Fed tightening from the second-half of 1999 to the first half of the next year couldn’t stop it, said Bannister and the team. 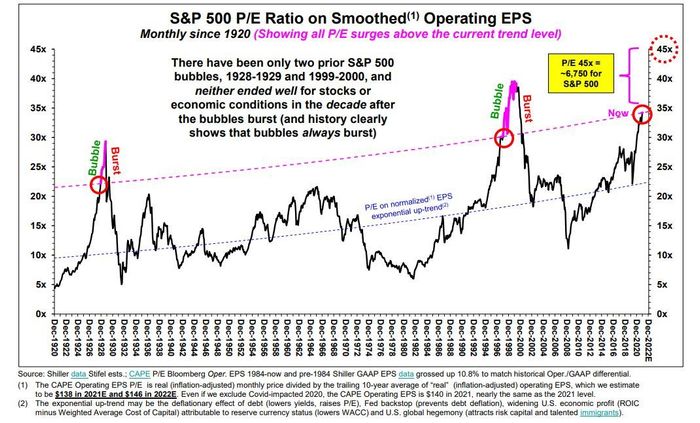 The only way to prevent such a bubble would be for the Fed to heed its own financial stability report, where it warned over elevated risk appetite among retail investors and high equity and real estate valuations, and “tilt hawkish.”

“Still, policy may arrive too late, and if the market goes ‘risk-on’ with a falling Equity Risk Premium and if the 10Y Treasury Inflation Protected Security (TIPS) yield remains repressed at -1.0% due to global central banks, a P/E [price-earnings] convexity bubble in 2022-2023E may occur,” they said.

While the big one may be a way off, they offer a near-term survival guide. Bannister and his team said if both the S&P 500 and commodities weaken simultaneously — they expect that due to dollar strength, a China growth slowdown, Fed exit signals and tighter global liquidity —investors can take refuge in S&P 500 defensives. So healthcare, consumer staples, utilities and telecommunications are the safety spots of choice, for now. 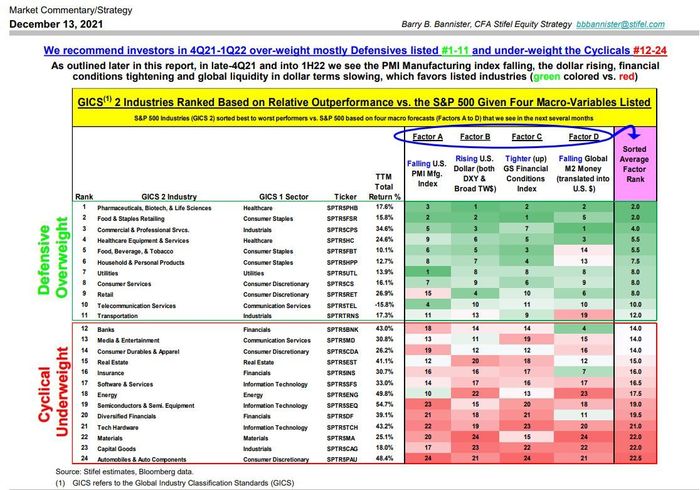 We’ve got Monday mergers and acquisitions. Pfizer is buying Arena Pharma ARNA, in a $6.7 billion deal. Software group SPX Flow has agreed to a $3.8 billion buyout from Lone Funds.

South African researchers say a two-shot course of Pfizer and BioNTech’s COVID-19 vaccine is about 23% effective against the omicron coronavirus variant, but may still prevent serious disease. Pfizer also got upgraded to buy at UBS, which sees $50 billion in COVID franchise sales next year.

Peloton has fired back lightning fast at a plot twist in the “Sex and the City” reboot that was partly blamed for some stock selling, with a new ad featuring actor Chris Noth…back on his bike.

Monday is quiet on the data front, but the rest of the week is busy enough with retail sales and some manufacturing gauges. The Fed’s two-day meeting kicks off Tuesday. Here’s a preview.

Iron-ore prices have been rising on speculation China will provide fiscal stimulus in early 2022, after the country’s top officials said at a weekend meeting that they want to stabilize the economy.

Celebrity chefs such as José Andrés are among those providing aid to Kentucky, which bore the brunt of a series of deadly and devastating tornadoes that hit multiple states this weekend.

Betting on bitcoin? A survey conducted by Jim Reid and other strategists at Deutsche Bank finds that the older crowd is less optimistic about more gains than the younger crowd. 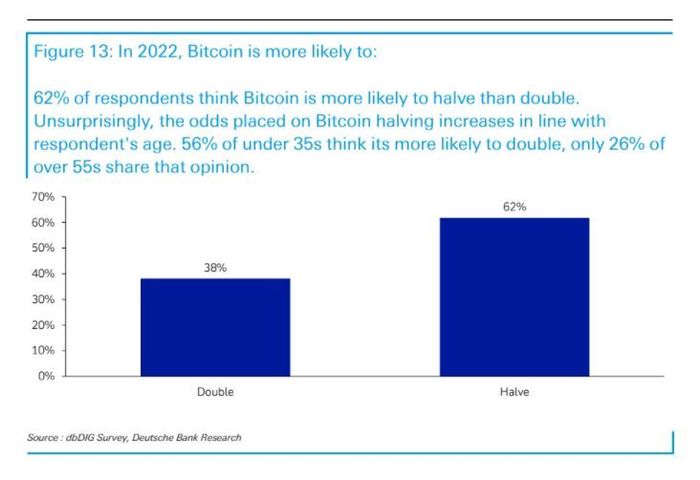 Stocks have slipped in early trading, and oil is lower. It was a mixed day for Asian stocks, but Europe is perking up, while bitcoin and other cryptocurrencies are softer. The beaten-down Turkish lira was getting crushed again after Standard & Poor’s warned of a downgrade. Then the central bank intervened.

The hearing, "Digital Assets and the Future of Finance: Understanding the Challenges and Benefits of Financial Innovation in the United States," is the latest from Congress to explore the issues concerning crypto assets.

Is Austin the next US crypto hub? Officials approve blockchain resolutions

The City of Austin gears up to become America’s next crypto hot spot by passing two resolutions focused on cryptocurrency and blockchain innovation.

Gucci jumps on the crypto bandwagon with U.S. project

Gucci’s high-end handbags and other luxury products can now be bought using cryptocurrencies, including bitcoin, in some U.S. stores, the Italian company said, as digital currencies move to broader acceptance.

Janet Yellen said it would be “highly appropriate” to aim for “a consistent federal framework” on stablecoins by the end of 2022 in the U.S., given the growth of the market.

A bipartisan pair of U.S. senators unveiled a bill on Tuesday that would establish new rules for cryptocurrency, and hand the bulk of their oversight to the Commodity Futures Trading Commission (CFTC).

The government is set to introduce a bill to ban private cryptocurrencies and create a framework for an official digital currency to be issued by the Reserve Bank of India (RBI) during Parliament’s Winter Session starting November 29.